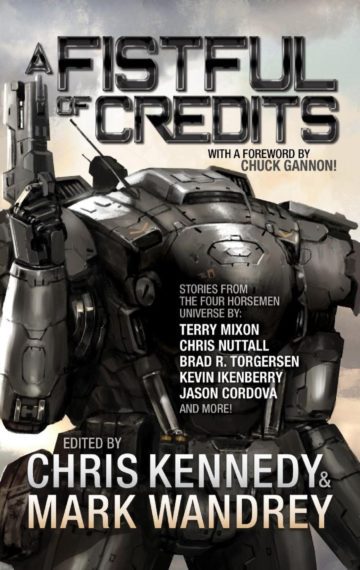 Enter the Four Horsemen universe, where only a willingness to fight and die for money separates Humans from the majority of the other races. Enter a galaxy not only of mercenaries, but also of Peacemakers, bounty hunters, and even a strung out junkie in the way of a hired assassin.

Edited by bestselling authors and universe creators Mark Wandrey and Chris Kennedy, “A Fistful of Credits” includes all-new stories in the Four Horsemen universe by a variety of bestselling authors—and some you may not have heard of…yet. The fourteen authors take on various aspects of the universe, giving you additional insight into a galaxy that isn’t at war…but definitely isn’t at peace. There’s only one thing for sure—anything’s possible for a fistful of credits!

Inside you’ll find:
Foreword by Dr. Charles E. Gannon
“The Last Alpha” by Mark Wandrey
“Breach of Contract” by Terry Mixon
“Paint the Sky” by Jason Cordova
“Surf and Turf” by Jon R. Osborne
“Stand on It” by Kevin Ikenberry
“Lost and Found” by Jon Del Arroz
“Gilded Cage” by Kacey Ezell
“Legends” by Christopher Woods
“With the Eagles” by Doug Dandridge
“Dead or Alive” by Paul Corcoran
“Hide and Seek” by Christopher Nuttall
“Information Overload” by Charity Ayres
“Enough” by Chris Kennedy
“CASPer’s Ghost” by Brad R. Torgersen